WaveNet & East Anglia Multimode seems to have grown quickly, initially a point of discussion between Tim M1MIT, Jim M0ZAH and I.. one early morning on the 8.30am random repeater coffee net where we thought it might be an idea to have our own D-STAR reflector to play with.

Being very keen on D-STAR and AllStar, I thought it might be cool if I were to put a spare AMBE transcoder into use giving D-STAR hotspot access to some of the more far off repeaters such as GB3VW which was (and will again be) AllStar linked. This, after a little troubleshooting, became a reality and we were soon testing D-STAR reflectors and FM repeater & node linking.

This quickly became known as WaveNet and we even managed some remote testing, being able to link a temporary AllStar node in Herefordshire back to the D-STAR reflector to keep in touch with each other as part of a shakedown test.

Jim M0ZAH then suggested it would be nice to add DMR and maybe even consider C4FM, given the success of GB7DS in Norwich. Later on, in conversation with James M0JGX, the interest in building a DMR & repeater linked multimode bridge surfaced with us realising that we had all the gear in place to make it happen.

What is it exactly?

There’s a few key components to our multimode system, covered in the sections below. We’ve purposefully made the bridge modular. The first test implementation was one big chain of transcoding end-to-end based around AllStarLink, whereas this second revision is broken down into a few main parts. 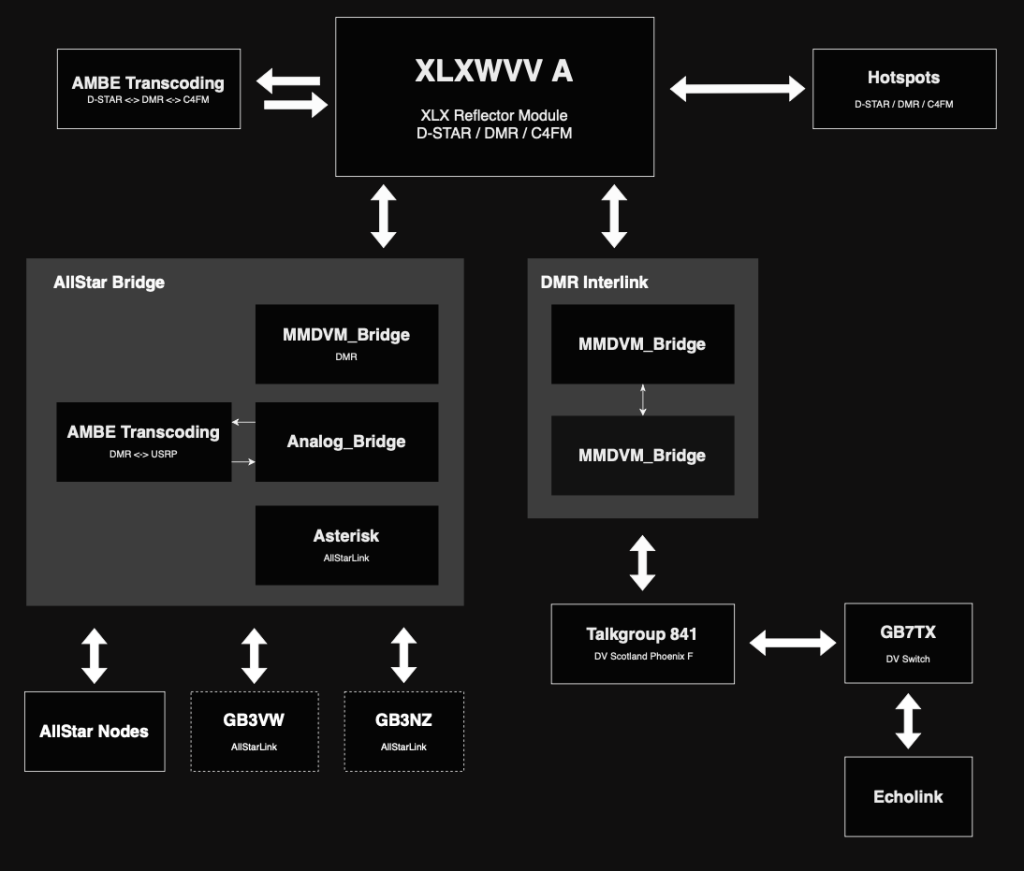 We’ve made a few customisations to the XLXWVV dashboard to improve clarity. Traffic that comes in from the DMR network side is clearly labeled as via ‘TG841’. Traffic coming in from AllStarLink is equally labelled ‘AllStar’ and is presented via the callsign MX0WVV, as AllStar traffic originates as analog FM and therefore doesn’t have embedded data for point of origin.

I’m sure we’ll continue to learn, tweak and change components of the set up. Most notably, we’re expecting more AllStar connectivity to be in place through our Wymondham repeaters (GB3VW/GB3NZ) soon.

We welcome users to join us, either via repeaters or your own hotspots whist we’re in deeper testing, details on the numerous ways to connect are covered in the following link: Multimode Reflector

Many thanks to Team Wave, Lowestoft & Great Yarmouth Repeater Group and DV Scotland Phoenix for supporting this collaboration